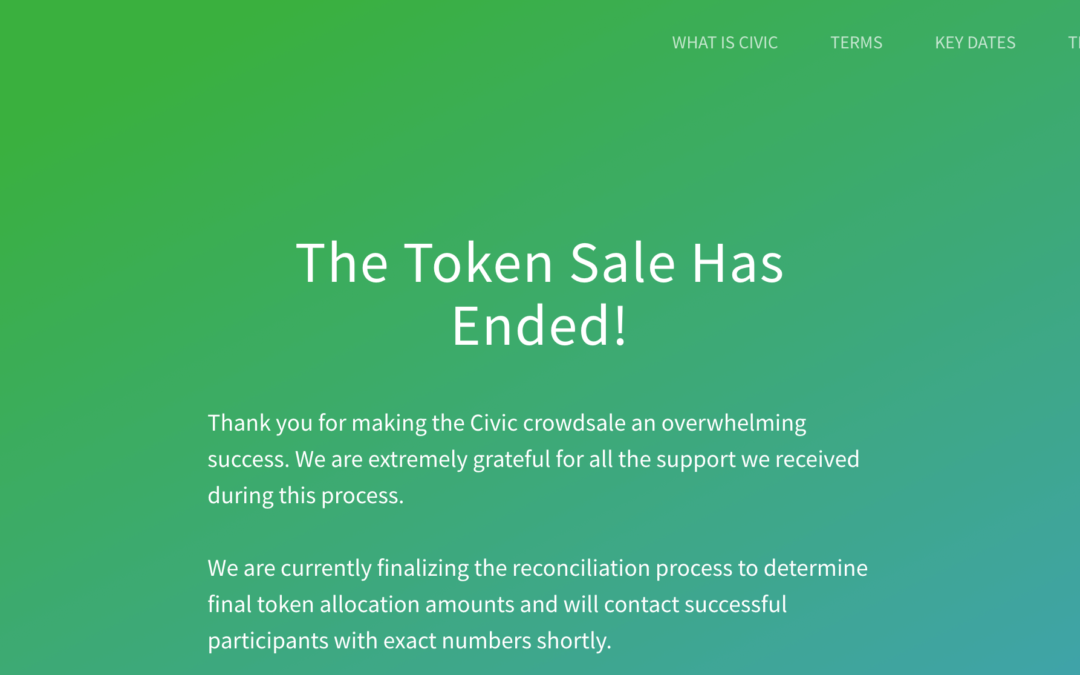 The sale is the latest so-called initial coin offering (ICO), in which creators of digital currencies sell tokens to the public in order to finance their projects, in a similar way that companies raise money with an initial public offering, except there is no regulatory oversight.

Civic, which calls the move a “token sale” rather than an ICO, is building an identity network which will connect companies and users and has created 1 billion tokens to achieve that goal.

The token allows for secure and low-cost access to identity verification through the blockchain, a public online ledger of transactions that leapt to prominence as the technology underpinning the first digital currency, bitcoin.

“We’re selling tokens for ID verification,” Lingham said. The tokens are being sold for the equivalent of 10 U.S. cents, but they can only be purchased using digital currencies bitcoin and ethereum.

Of the 1 billion tokens created by Civic, 33 percent were offered in the public sale, which is continuing until June 28. Another 33 percent will be given away to companies and users to accelerate network growth, and the remaining 33 percent will remain in the company’s inventory and will be available for sale only after three years, according to Lingham.

For this sale, $33 million was the maximum amount that could be raised. Proceeds from the sale of the tokens will count as revenue for the company, Lingham said.

Civic held a pre-sale several days ago, Lingham said, to ensure that the company was able to place all 330 million tokens. It was able to do that, but it decided to hold a public sale this week to allow smaller buyers to acquire up to 110 million of the 330 million total token allocation.

If this week’s token offering sells out, the pre-sale buyers would only get 66 percent of their initial allocation, Lingham said.

“We want a big network of people behind what we’re trying to do,” said Lingham. “This is probably the most widely distributed sale with the most number of people participating.”

Lingham said Civic has more then 10,000 buyers, and as of late Wednesday, there were 28,678 people lining up to buy the token.

“With Civic, no one person owns more than 1 percent of the tokens sold. That’s built in the model,” he added.